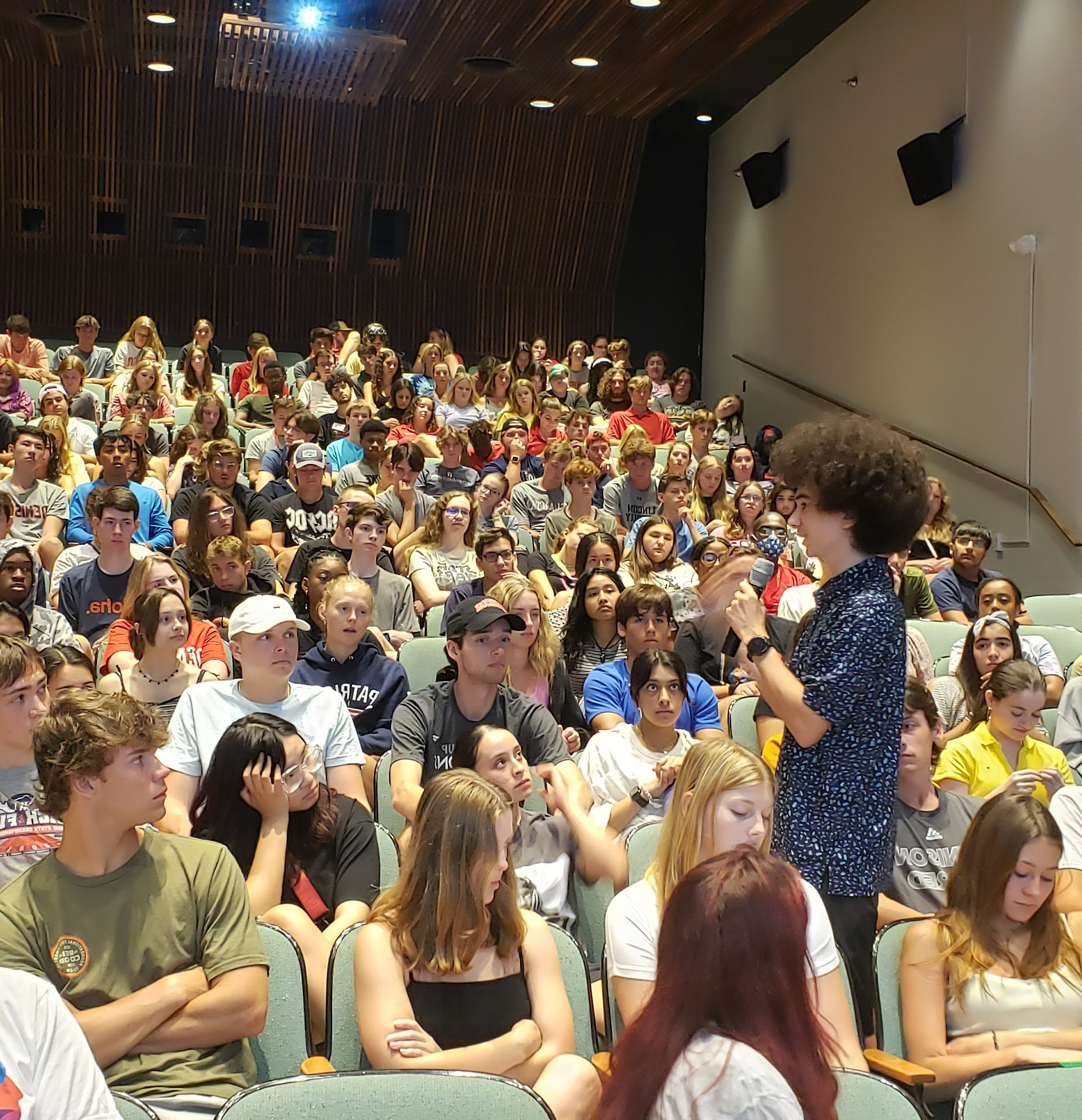 First-year Orientation Is More Than Just a Tour, It’s an Introduction to Campus Culture and Values

On August 28, 2022, as part of the American Council of Trustees and Alumni’s (ACTA) College Debates and Discourse Program, in collaboration with Braver Angels and BridgeUSA, Denison University became the first campus in the country to host one of our debates during freshman orientation. The event was held in partnership with the Lisska Center for Intellectual Engagement and brought together 680 incoming freshmen to learn the principles of respectful and productive debate.

The students were divided into three debates. In each session, Denison student leaders and faculty discussed the question, “Should Denison impose limits on free speech?” The freshman participants then had the opportunity to ask questions and make their own speeches. Dr. Adam Davis, who serves as director of the Lisska Center and helped design the event, said, “We’re really excited that we have faculty participating in these debates as part of first-year orientation so that our incoming students see that it’s okay to disagree with a professor. In fact, we encourage that. And you’re going to see professors take differing views. And that’s the kind of campus that this is.”

Each debate concluded with a brief workshop. Students were asked to reflect on the experience and discuss how their participation in the debate might shape their time at Denison. Several students remarked that they could leverage the invaluable skills they began to develop during the debate in the classroom and on campus—as well as in their friendships, with their families, and in future careers.

One student speaker commented that despite his initial skepticism, he found that his fellow students “were actively engaged and had very positive experiences.” Another student wrote to ACTA, “In the past two weeks, countless freshmen have come up to me, telling me what a meaningful experience the debate was for them. I believe the debates set an important tone for their Denison experiences, demonstrating the importance of intellectual inquiry and respectful dialogue on our campus.”

This first-of-its-kind event welcomed students to campus while simultaneously exposing them to Denison’s core values of open exchange and discourse, thus setting the tone for their future educational experience. Reflecting on the event, Denison University President Adam Weinberg commented, “A liberal arts education fundamentally depends upon everybody being a teacher and a learner. It fundamentally depends upon people having their minds wide open, being excited to challenge orthodoxy . . . [so] when somebody says something that you find deeply offensive, to figure out what you can learn from it. . . . I think if colleges don’t find a way to reset the tone and the habits with their incoming students, it’s going to be really hard to help them take advantage of the educational opportunities that we’re providing on our campuses.”

In our increasingly polarized society, many students have not learned the skills of constructive dialogue. In ACTA-Braver Angels debates, students practice how to present persuasive arguments with civility and respect after carefully listening to their ideological opponents. In a forthcoming interview on ACTA’s Higher Ed Now podcast, Dr. Weinberg remarked, “I think it’s super important for colleges to wade into this space, especially with their first-year students, because we have a generation arriving on our campus that mostly has grown up in a society where what’s been role-modeled for them and what they’ve been taught is to choose a side and don’t deviate from it. Don’t say anything controversial because it will get out on social media and there goes your social life. And if somebody says something you disagree with, attack.”

Denison University has taken significant steps to promote a culture of free expression on campus. In 2016, the institution adopted the Chicago Principles on Freedom of Expression, which state, “the University has a solemn responsibility not only to promote a lively and fearless freedom of debate and deliberation but also to protect that freedom when others attempt to restrict it.” Denison’s statement on Freedom of Expression and Academic Freedom explains, “Academic freedom is essential to the aims of higher education and to the University’s goals of fostering critical thinking, moral discernment, and active citizenship among its members.” We are also excited to announce that Denison will be a part of an upcoming research project driven by ACTA, Braver Angels, and BridgeUSA. This project, funded by the John Templeton Foundation, will evaluate the impact of Braver Angels campus and classroom debates on students at 10 campuses across the country.

The College Debates and Discourse team is encouraged by the enthusiasm of Denison’s community in response to our first freshman orientation debate program.  We look forward to expanding this initiative across the country to introduce future classes of incoming college students to the indispensable values of free inquiry and open discourse.

Jacob Mchangama is human rights lawyer in Denmark. He is the founder and executive director of Justitia, a think tank which aims to promote the rule of law and fundamental human rights and freedom rights both within Denmark and abroad by educating and influencing policy experts, decision-makers, and the public.

‘The atmosphere is electrifying’: How Braver Angels debates are lighting up college campuses

Imagine you’re a college student and a controversial issue comes up during class. In my experience, it can often go one of two ways: either everyone agrees – making the discussion uneventful if not boring – or somebody disagrees, and the conversation quickly escalates and...

College administrators are now acknowledging they have created environments on their campuses that diminish free expression and choke intellectual liveliness. For years, the game plan was to simply disavow the stifling of free expression on college campuses, while at the ...

Two years ago Cornell University asked a California real-estate developer and longtime donor for a seven-figure contribution. Carl Neuss didn’t write the check immediately, saying he was worried about what he saw as lib...