Can Storied Williams College Be Saved From Itself? 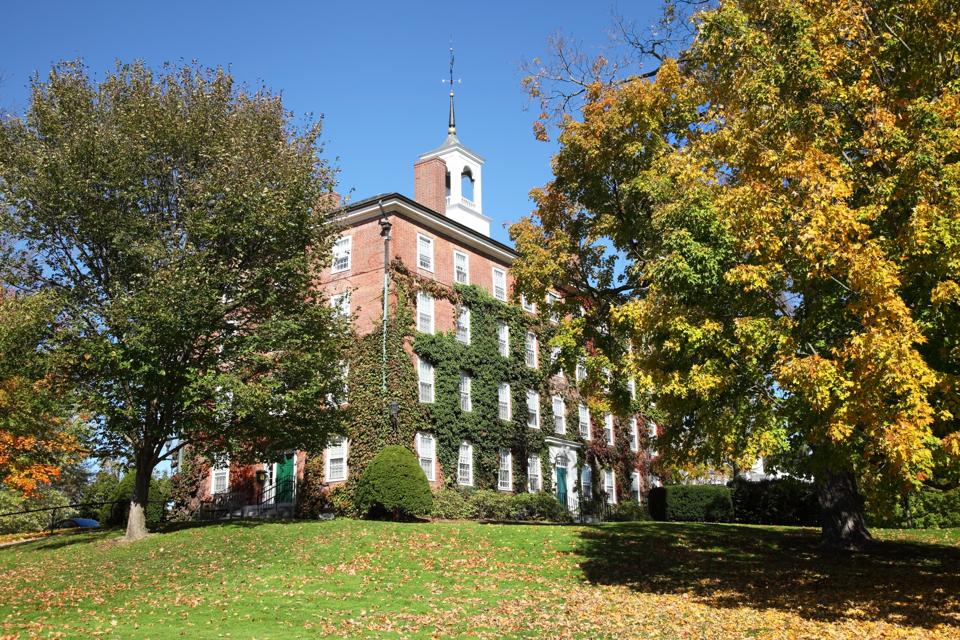 For $73,000 per year, top students with SAT scores well north of 1,500 count themselves lucky to be accepted by Williams College. There, however, despite the chilly Massachusetts climate, they are in danger of melting with their fellow snowflakes.

Last year, the school canceled a play for alleged racial insensitivity, notwithstanding its African American authorship, minority casting and gay Bengali director. Students protested and disrupted a faculty meeting, apoplectic at the thought of the university strengthening its free speech bylaws, and an online petition against free speech garnered 363 signatures, roughly one-sixth of the campus. The student council denied recognition to a pro-Israel student club, while recognizing a pro-Palestine student club. Now, the zealous student activists have reached a new low, organizing a boycott of “all English classes that do not take seriously the matter of race—that is, those classes which do not include more than a token discussion of race and more than a token number of writers of color.”

An online manifesto, running to 26 pages (don’t they have homework?), elaborates on students’ grievances related to the perceived lack of diversity in course offerings and faculty. They do not feel that enough courses “engage substantially with issues of race.” They refer, presumably, to current offerings on Dante, Shakespeare and 19th-century British literature. (Apparently, current offerings such as “Black Queer Looks,” “Black Literature Matters,” “Blackness, Writing, Prison,” and “U.S. Literature and Postcolonial Studies” do not suffice to meet their expectations of due representation.) They cite examples of minority English professors being denied tenure. They cite an op-ed in The Feminist Wire by two former faculty members who left Williams because the college did not create a safe space for “Black radical thinkers.”

The major as it now stands is remarkably flexible: If anything, one could argue that its light requirements of a single course on texts written before 1800 and another before 1900 neglect seminal authors like Chaucer, Milton, Shakespeare, Austen and Brontë. The roster of options offered by the Williams English department is full of postmodern thinkers. But clearly, that liberality has fueled, not satisfied, the desire to de-platform challenging voices of the past.

How did Williams, founded in 1793, the cradle of captains of industry, ever get to this point of intellectual dysfunction? Look at the Wikipedia entry and weep at the roster of distinguished alumni: 3 chairmen of the U.S. Securities and Exchange Commission, 71 members of the United States Congress, 22 U.S. Governors, 4 U.S. Cabinet secretaries, an associate justice of the Supreme Court and a president of the United States. And now the very thought of living by the First Amendment on campus proves grounds for a hit squad of students to disrupt a faculty meeting, while courses on anything European inspire a boycott.

Some of the blame lies in academic permissiveness. Williams bloviates about multiculturalism and diversity, but students are not required to do the hard work of studying someone else’s language. That is lazy diversity. A student can avoid ever taking a math course, or a course in economics, or a course on American history or government.

Further blame lies in administrative bloat. Williams has a “bias response team,” to which students can report incidents of bias and await official response from the compassionate commissars. There are 2,100 undergraduates at Williams and its Office of Institutional Diversity and Equity has 14 employees on its roster. Is it possible that the apparatus is keeping the apparatchiks so busy looking for offenses that they’ve turned to manufacturing them?

(Williams College spends 40 cents on administration for every dollar spent on instruction. The growing administrative class on college campuses, which typically leans left of faculty and students and which increasingly tends to favor social activism, has had a profound impact on collegiate life nationwide. If you have any doubts, read about Oberlin College’s boycott of a local bakery.)

Catering to student demands about the curriculum would send a damaging signal. There is a growing misconception on so many college campuses today that mankind’s struggles, the human experience and everything worth writing about boils down to identity—as predefined by race, gender, sexuality and class. The rest of the human condition and human experience, as far as the activists are concerned, just doesn’t matter.

In The Souls of Black Folk, W.E.B. Du Bois cried out: “I sit with Shakespeare, and he winces not. Across the color line I move arm and arm with Balzac and Dumas, where smiling men and welcoming women glide in gilded halls. From out of the caves of evening that swing between the strong-limbed Earth and the tracery of stars, I summon Aristotle and Aurelius and what soul I will, and they come all graciously with no scorn nor condescension.”

Years later, in a Birmingham jail cell with only his heart and his memory to guide him, Martin Luther King, Jr. invoked St. Augustine, Reinhold Niebuhr, Martin Buber, Paul Tillich, Thomas Aquinas and Plato. Scrubbing these authors from the curriculum will do little to further students’ progressive causes.

And William Faulkner, in his speech to accept the Nobel Prize in Literature in 1949, said that the writer must master the “old verities and truths of the heart, the old universal truths lacking which any story is ephemeral and doomed—love and honor and pity and pride and compassion and sacrifice.” Will the aspiring scholars and writers at Williams master the “old verities” without studying the classics or the Western Canon?

It is the eleventh hour at Williams for faculty and administrators to fix a dysfunctional academic environment that betrays both minds and hearts. If Williams capitulates to activists (which, admittedly, seems unlikely, given the extreme nature of their “demands”), they will be letting down their students, failing to offer a rigorous and balanced education. College leadership needs to understand that being “student-focused” does not mean being “student-run.” The adults at Williams must stand up and say, “This is not who we are.”

One real ray of hope has come from courageous faculty who are trying their hardest. A group of faculty members attempted to endorse the Chicago Principles on Free Expression, and several others have spoken out. Professor Luana Maroja has been a brave and articulate defender of academic freedom, writing in The Atlantic and recounting her experience of being shouted down by student activists. Meanwhile, Professor Amanda Wilcox, chair of the Faculty Steering Committee, released a statement reaffirming the college’s commitment to free inquiry. Now it is time for the administration and the board to stand up for these clearsighted professors.

ACTA's Michael Poliakoff explores the erosion of academic freedom in the academy with John M. Ellis, professor emeritus at University of California-Santa Cruz, and the author of The Breakdown of Higher Education: How It Happened, the Damage It Does, and What ...

When it comes to its free speech hypocrisy, Penn doesn’t get it… or doesn’t care.

Last month, the American Council of Trustees and Alumni wrote a letter to the trustees of the University of Pennsylvania to express concern about

On Wednesday, December 11, President Trump signed the “Executive Order on Combating Anti-Semitism,” a measure designed to counter anti-Semitism at colle...