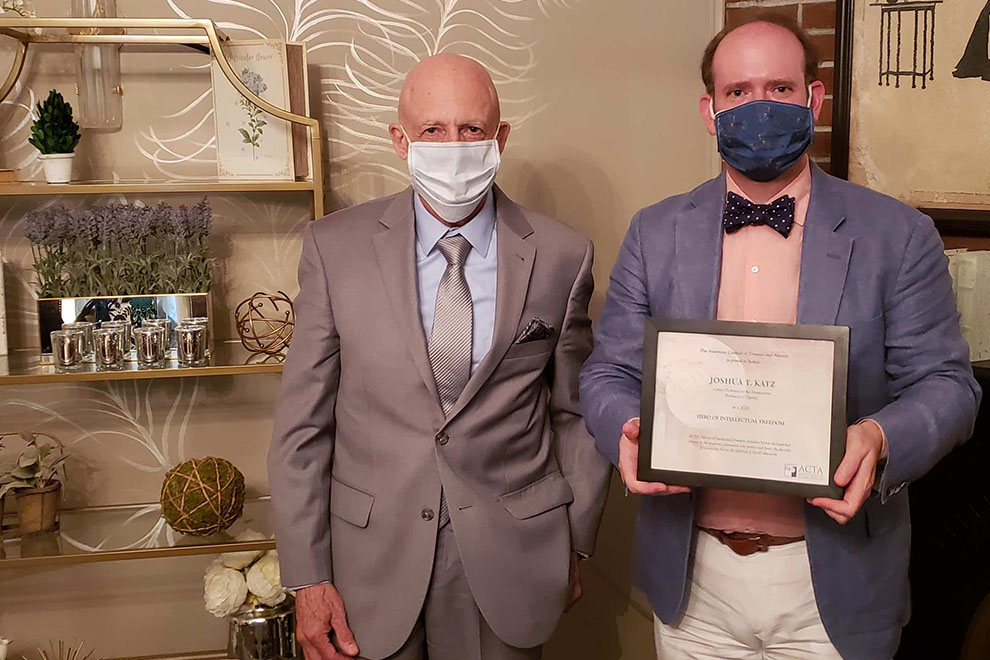 This award recognizes those members of the academic community who protect and foster the diversity of viewpoints that is the lifeblood of liberal education. Through their examples, American higher education moves forward. In receiving this award, Professor Katz joins the company of Samuel Abrams, professor of politics at Sarah Lawrence College, who published a meticulous analysis in the New York Times of the overwhelming political and ideological imbalance among student affairs administrators and the effect of that on student life. And Professor Katz joins Abigail Thompson, UC–Davis professor of mathematics. She exposed, to the rage of many of her colleagues, the practice at several UC campuses of pre-screening faculty candidates and eliminating those not deemed to have sufficiently promoted diversity. It is to this heroic company, willing to speak truth against the raging flood of dysfunction, that we welcome Professor Katz.

I must, however, first offer an apology. It is ACTA’s way to entertain its speakers and guests properly. I have to tell you how much it pains me not to serve food and wine on this occasion. But please mark calendars for November 12, 2021, when, God-willing, we will celebrate our “25 plus 1” anniversary at the Library of Congress, honoring historian Gordon Wood as the winner of our Philip Merrill Award for Outstanding Contributions to Liberal Arts Education, with tributes from writer and Princeton alumnus George Will and New-York Historical Society CEO Louise Mirrer.

At a time when entirely too many citizens of the academy, whose quintessential duty it is to seek and speak the truth, have shrunk back, fearing that they will be shunned and sanctioned, Professor Katz delivered on July 8 his own Declaration of Independence. He called for candor, fairness, and academic freedom in response to the clear threat to all of those virtues evident in the long demand letter to President Eisgruber, signed by 279 members of the Princeton faculty. He stood up alone against an agenda that could lock the university into patterns of illegal discrimination and oppressive control of research and publication. I asked him, on rather short notice, I confess, to tell this story in full today, and ACTA will do its best to make sure to share it with the nation.

As everyone here knows, Joshua Katz is a most distinguished scholar, whose research and teaching extend from Indo-European linguistics to Homer to Latin poetry—especially to that gateway to civilization, Virgil, and on to the reception of classical literature in later centuries. Two of his very gifted students, Samantha Harris, VP of FIRE, and Solveig Gold, now writing her doctoral dissertation at Cambridge University, are here, and Samantha will speak to us in a few moments.

A brief digression on Solveig and Samantha. Solveig, a leader of the Princeton Open Campus Coalition, spoke at ACTA’s annual conference in 2016. It was one of the best speeches given at our conferences—and I’ve been to many. Samantha’s editorials cut like a razor through the evasion and opportunism of those who would deny freedom of speech. The disciples do honor to their mentor.

In his campaign to defend the ethics of the academy, Professor Katz takes up, not just in theory but in practice, that most precious part of Western Civilization. The late Sir Kenneth Dover wrote: “Tolerance of the free expression of intellectual criticism was at most times and in most circumstances a predominant characteristic of Athenian society.” Are you listening, Princeton? Are you listening, Princeton Department of Classics? If we lose that heritage of probing, critical challenge, we have drained the lifeblood from our ancient heritage.

In addition to presenting a certificate commemorating his achievement, we also want to present Professor Katz with some tangible trophy. Now at the framers is this 1802 engraving, depicting—or possibly imagining—the ruins of the Mouseion, the “Home of the Muses,” founded by Ptolemy I. It was the greatest center of the arts and sciences the world had seen, at whose center was the wondrous Library of Alexandria. The story of the Mouseion has an uncanny relevance today. Once the greatest repository of learning that the world had ever known, whatever faint traces there may still be remain hidden. The fate of this place of scholarship and literary brilliance, whose legacy permeated later Greek and Roman literature, warns us that civilization is fragile. That warning is ultimately what brings us here today.

Princeton distinguished itself by embracing the Chicago Principles on Freedom of Expression. But there is much more than that to being a campus that truly fosters intellectual freedom, as is now abundantly clear. Professor Keith Whittington, here with us today, wrote, “Embracing free speech is easy if the speech never seems very challenging. It is easy to listen to pleasing ideas and affirmations of our own prior beliefs. It is much more difficult to learn to tolerate those with whom we disagree and who espouse ideas we find preposterous, repugnant, or even dangerous. We tolerate, and even affirmatively seek out, such disagreements not because they are pleasant but because it is through controversy that we can make progress, often in the most unexpected ways.” Professor Katz has hardly articulated anything faintly “preposterous, repugnant, or dangerous.” The reflexive howls of anger against him, the formulaic dismissal of his thoughtful warnings, should cause Princeton’s leadership to reckon with its failure to create the academic community on which progress ultimately rests. The man responsible for the Chicago Principles, President Robert Zimmer himself, observed: “Those who argue for avoiding discomfort, while seemingly seeking to aid students, are in fact doing all students a great disservice—they are advocating for reducing the quality of education.”

Yale’s C. Vann Woodward Report admonished: “The history of intellectual growth and discovery clearly demonstrates the need for unfettered freedom, the right to think the unthinkable, discuss the unmentionable, and challenge the unchallengeable.” When a university does less than that, it too threatens civilization. ACTA’s message to Princeton’s faculty and administration is that they need to thank, lionize, and cherish Professor Katz for reminding them what is at stake when ideology stamps out the pursuit of truth and understanding that is the birthright of the academy.

One day, history will turn its lens on Princeton’s faculty, on its president, on all of us, great and small, and ask what actors we were in the issues of our times. Herakles, the myth goes, stood at the crossroads and chose the difficult path that led to virtue. Thank you, Joshua Katz, for your light, for showing us the path, rocky and difficult, but civilization’s only path forward.

The nation owes Florida a vote of thanks. What happens on campus does not stay on campus. The level to which we prepare our college graduates for career, community, and citizenship will be a major driver of our success as a nation. What we will witness in Governor DeSanti...

The American Council of Trustees and Alumni’s (ACTA) Vice President of Academic Affairs, Dr. Jonathan W. Pidluzny, testified on Thursday, April 7, 2022, before the Subcommittee on Civil Rights and Civil Liberties of the House Committee on Oversight and Reform. The...