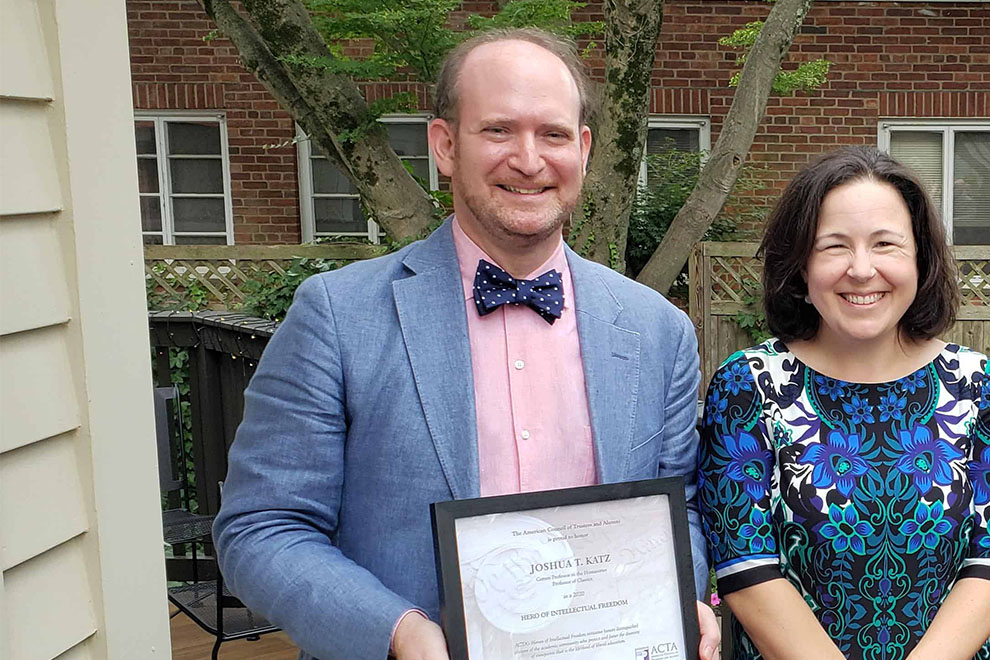 I first met Joshua Katz around the turn of the century. (Okay, I just wanted to say that—I
knew graduating in 1999 would sound very old-timey someday!) I was a Politics major who
spent most of my time steeped in courses like Robby George’s Civil Liberties, but having
completed most of the requirements for my major, I had time to explore other intellectual
interests.

So I signed up for a course in the Classics Department called “Origins and Nature of English
Vocabulary.” That course was taught by Joshua Katz, a brand-new professor who appeared
to be not much older than I was. It ended up being one of my all-time favorite classes at
Princeton, and the professor a lifelong friend. More than twenty years on, I still remember
things like the Great Vowel Shift and the fact that we say things like “hwat” and “hwich”
because those words actually used to be spelled with the “H” first!

But what I remember most of all was that young professor’s unbounded excitement about
his subject. His joy at teaching made the class a joy to be part of, and what could have been
dry material was transformed by his love of the subject into something both fascinating and
memorable. He was the type of inspired professor we all imagine we will have when we go to
college, but who is far more rare than TV and movies would lead us to believe.

Over the years, Joshua would occasionally let me know that he admired the work I was doing
at FIRE, but I never got the sense that he was a political person in any way. Rather, he
seemed to me to be someone who simply believed in the best version of the university as a
place where people could come together and explore ideas in a free and open setting.

A few weeks ago, I was outraged to learn of the faculty petition that basically demands the
total dismantling of academic freedom at Princeton in the name of anti-racism. The idea that
a group of Princeton faculty would actually support the formation of a committee to
investigate and punish research and publication that the committee subjectively deems to be
racist strikes me as utterly beyond the pale. So I wrote my own little diatribe about it for
FIRE’s blog, and I sent a copy along to Joshua with a note about how frustrated I was.

To my surprise, Joshua wrote back right away to say that not only was he aware of the
petition, but that he and Robby George had been in regular communication for weeks about
the issue of academic freedom at Princeton. (I have to pause right now to point out that for
a nerd like me, finding out that my two favorite professors were working together to advance
free speech and academic freedom was basically the equivalent of finding out that your two
favorite bands are going on tour together.)

Joshua also told me that he was going to be publishing his own piece about it in Quillette , for
which he expected to be “canceled instantly and hard.” And for me, this is really why we are
here to honor Joshua today: He knew full well the personal and professional risks involved in
speaking out on this topic, and he refused to be silenced. And without people like Joshua
who are willing to take that risk, we will never be able to overcome the pall of orthodoxy
that has descended over our universities, over the media, and increasingly, over corporate
America as well. So I just want everyone here to understand that Joshua knew going into this
that he would likely pay a price for speaking his mind, and he paid it not only because he
values his own freedom but also so that others can be free as well. I know this has not been
easy for him, and I want to acknowledge his sacrifice.

Immediately, and predictably, we saw the toxic effects of this pall of orthodoxy in the
response to Joshua’s column. Calls for official action poured in, and for a time, the university
appeared to be taking them seriously. When Matt O’Brien organized an alumni petition in
support of Joshua, a number of people wrote back to say they wished they could sign, but
they were afraid of losing their jobs. It is truly a sad day when even signing a statement
supporting someone else’s right to speak out carries a price so high that few are willing to
pay it. That is what we are fighting against.

Of course, by now we have all heard the good news that Joshua has emerged victorious and
in doing so has blazed a path for others. Standing up to the bullies works. I know that for a
private person who does not seek the spotlight, the glare that Joshua has been under for the
past few weeks has been a lot to bear. But in bearing it, Joshua, you have done something
tremendously important. You have shown people that there is a meaningful alternative to
capitulation and ritual self-flagellation. Your bravery will empower others to stand firm. And
the work that you, Robby, and others have been doing to create an organization that will
ensure support for others in your position is going to be a game-changer. You truly deserve
this honor today, and I’m very grateful to be able to be here to celebrate you.

The nation owes Florida a vote of thanks. What happens on campus does not stay on campus. The level to which we prepare our college graduates for career, community, and citizenship will be a major driver of our success as a nation. What we will witness in Governor DeSanti...

The American Council of Trustees and Alumni’s (ACTA) Vice President of Academic Affairs, Dr. Jonathan W. Pidluzny, testified on Thursday, April 7, 2022, before the Subcommittee on Civil Rights and Civil Liberties of the House Committee on Oversight and Reform. The...